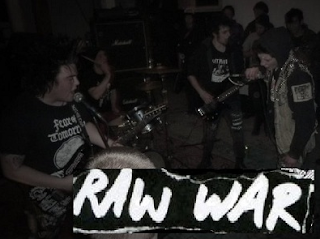 RAW WAR are a young band who play their own brand of streetpunk/d-beat, coming out of Victoria B.C. They've bin playing out for about 2 years now in the northwest, and in that time they've independently released a 7" and have plans for an LP in the near future.

1.When and where did RAW WAR form, who does what?

C: Raw War started in June '09, at Brandon's place after alot of beers. At the time we called ourselves "Glue Bag Chaos" and we weren't too serious. We had myself (Cordell) playing guitar,Dylan on drums,Bryce on vocals and Brandon on bass. We were playing along the lines of chaotic dischord but it wasn't until about 6 months later we started to get serious with it. Thus changing the name and starting to play a bit more structured punk in the vien of Scandinavian 80s hardcore. At this time Bryce and Dylan swaped vocal and drum duties. Thats around when we started to play shows and stuff.

2.You can clearly hear influences ranging from Confuse to oi-era One Way System in your sound. Who brings what influences into the songs?


C: Well we all have the same idea of what we want the music to sound like. Anti-Cimex is usually what we go for, but being big fans of uk82 and anarcho those get tossed in very often....aswell as Blood Spit Nights/Dog Soldier feeling at times.
3.What do you make of the west coast punk scene?  Any good under-exposed bands you'd like to mention?
C: There are alot of good bands coming out right now, Total War from Vancouver is great aswell as Fodder and Veratterisch from California to name a few.
4.You've released a 7" independently, and there's talk of an LP. What are you plans as far as future releases and tours?
C: We'll we're going into the studio in a couple weeks to record the LP, if all goes well we'll have it released early 2012 followed by a west coast tour.
5.Any final thoughts?
C:Check us out if you like loud fast and aggressive punk http://rawwarpunk.blogspot.com/.  Thanks!

Have a listen to their 7" here - http://www.youtube.com/watch?v=Em7MjOe6LC4

Live versions of song's from the upcoming LP - http://www.youtube.com/watch?v=7LqxaXTqUSs&feature=related/